A alpine conveyor can be used in a wide variety of applications, such as stowing products, connecting machines with different speeds, bridging height differences or using specific functions such as cooling products. The different areas of application are described below:

Buffers are required in the production process for various reasons. If machines fail for a short time due to machine failures, maintenance or repairs, accumulating conveyors or spiral conveyors can compensate for the failure for a short period of time by either feeding the next machine or by collecting the failure of the following machine, in which they pick up and store the processed material until it is ready for use again.

In some production processes it is necessary that the transported goods have to be dried or cooled in the production process. The accumulating / alpine conveyor with its long transport distance is ideally suited for this purpose, which is very space-saving due to its serpentine arrangement.

A further function of the alpine conveyor (storage conveyor) is that it can bridge height differences and at the same time create buffers in the production process. The alpine conveyor is a very space-saving solution if, for example, transport goods have to be transported up or down for processing or if passageways or forklift routes have to be kept clear.

Consulting for your conveyor technology project

We would be pleased to advise you personally on your project: The modular automation team consists of experienced engineers in the field of conveyor technology. Talk to us, we will be happy to help you with ideas, advice and solutions.

Not sure which system is right for your product? Here you will find an overview of all system sizes, including technical data.
Our assortment ranges from 44mm to 103mm wide chains and is suitable for products weighing up to 20 kg. 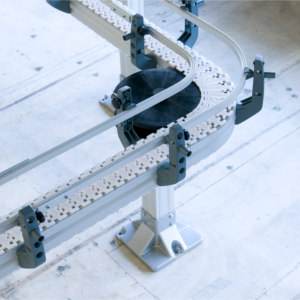