2. After being positioned, the stacked trays are conveyed to the handling station, where the workpieces are removed from the trays, or the trays are filled with workpieces, as the case may be.

3. The filled or emptied trays are then re-stacked.
(If desired, palettes can also be oriented as from step three to step 1.)

Advantages of EuroPal HTS tray stackers at a glance:

✔ Highly space-saving: The compact design of these stackers saves loads of valuable space at your production facility, in that the machines are 30 to 40 percent more compact than the competition’s products.
✔ Reasonable cost thanks to a modular design, which allows for customised solutions for the price of a mass produced item.
✔ Quality assurance: Automated processes ensure that each and every one of our tray stackers exhibits the exact same superlative quality.
✔ Helps roll back costs, thanks to automated processes and uniformly high product quality.
✔ A highly versatile solution that can be readily adapted to your needs: Our tray stackers can be adapted to accommodate various types of trays, blister packs and workpiece carriers.
✔ A multi-facetted solution: Thanks to the product’s straightforward configuration, it can be rapidly and simply deployed for other production steps.
✔ Great autonomy thanks to automated production processes.
✔ Can be used for a broad range of products: For example, our tray stackers are ideal for auto parts, ball bearings, gears, valves, fan blades, discs, printed circuit boards, solenoid valves, rotating parts, and much more.
✔ Reduces interfaces: The machine’s integrated handling functionality enables you to reduce the number of production process interfaces – which in turn reduces manufacturing defects and lightens employees’ workload.

Integrated handling functionality allow for safe and reliable handling of your products.

The handling functionality that’s integrated into HTS tray stackers can be customised for your products, so as to ensure that your products are handled safely and reliably. This in turn reduces defect rates to virtually zero and promotes outstanding product quality – which in turn rolls back production costs.

We offer a broad range of different palletizing machines in different versions and sizes. In the following you will find an overview of the palletizers and matching accessories from modular automation:

If you have any questions or need a consultation - please do not hesitate to contact your responsible contact person: 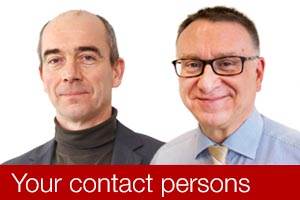